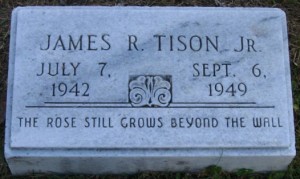 James R. Tison, 7, son of Mr. and Mrs. J. R. Tison of this city, was fatally injured Tuesday afternoon when the car in which he was riding collided with another car east of Lake City on U. S. 90 just outside the city limits.

Mrs. Tison, driving east in her car, applied her brakes to wait for a car heading west to pass before she turned into her driveway. The brakes grabbed, however, and she was pulled toward the approaching car which was unable to stop. She and her son were thrown from the car and the child killed.

The occupants of the other car, Mr. and Mrs. H. W. Bihli, of New Orleans, La., were also injured and taken to Lake Shore Hospital where Mr. Bihli was found to be suffering from head injuries and Mrs. Bihli, the driver, from cuts and bruises. State Highway Patrolman Weaver and Sheriff Ralph Witt investigated the accident.

Services were held for young Tison yesterday afternoon at three o’clock in the chapel of Wilson Funeral Home with Rev. A. A. Koestline officiating. Interment followed in the Memorial Cemetery.

James Tison was born in Lake City and lived with his parents on East Duval Street. He was a student in the second grade of the Lake City school and a member of the First Baptist Church Sunday School of this city.

He is survived by his parents, Mr. and Mrs. J R. Tison, Sr., a sister, Judith Ann, his paternal grandmother, Mrs. W. P. Tison, all of Lake City, and his maternal grandfather, John S. Strickland of Gainesville.