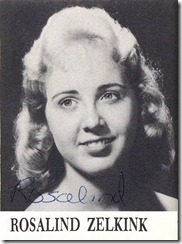 50th Reunion
After high school, I went to Emory, met Ernie, my husband during my last year.

After college I worked for Eastern Air Lines, thought it would be fun for a year, ended up staying 19 years, with a break for getting married and living in Germany.

We got married in 1967 at Fort Ord while he was in the army, then lived in Germany for a couple of years, courtesy of same army. Cured me of ever wanting to live abroad.

We have lived in Atlanta since 1969, and in the same house since 1977. We have two daughters, Elizabeth, 35, and Teresa, 32. Elizabeth lives in Atlanta, not married, is a hospice chaplain and we see her a lot. Teresa lives in Los Angeles, married to film director (STRUGGLING), she is a horticulturist but works for an architectural firm doing marketing and anything else that needs to be done. Jim, the struggling director, has made a few self-financed short films but mainly works on reality tv as he works his way up.

I worked for EAL until a year before they went under, then took a break, then worked as a travel agent for a few years. Am now really retired, belong to a movie club, a book club, and spend a lot of time at the Y. Have travelled a lot, thanks to airline and travel agency connections, still love to travel but it’s a big hassle now as we all know. We do get to LA a lot to visit Teresa and Jim. My daughters and I had our 1st annual mother/daughter trip last year and are planning to continue the tradition. I am so lucky that we get along so well.

Can’t think of anything really exciting, good or bad, to share.

Barbara, I assume you will edit this a lot, just decided to do it quickly without thinking a lot, hope it helps.

Thank you so much for all the work that this reunion requires. I am the social director for my movie/event-going group and it definitely is a job, so I appreciate what you do. Let me know if there is anything I can do ahead of time or at the event. Ernie and I are planning to drive down on Friday morning and attend all events!!