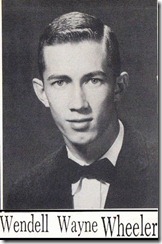 He was born on August 19, 1941 in Lake City, Florida and died November 27, 2020. Wendell was an Eagle Scout and graduated from Columbia High School before he served in the United States Navy aboard the USS Roosevelt. He graduated from Florida State University where he was a member of the Kappa Alpha Fraternity. Wendell earned an Accounting degree and opened his own CPA office in Lake City in 1971.

He proudly served the Lake City community through his practice and through various community service organizations for over fifty years. He was a world traveler, a voracious reader and he loved the life he lived.

He is predeceased by his parents, Willie and Eva Crews Wheeler, his brothers Alton and Edwin Wheeler and his sister Frances Wheeler Worthington.