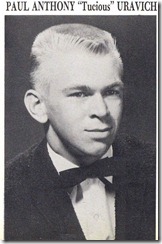 50th Reunion
Upon graduation from Columbia HS, this energetic. albeit naive, Lake City novice embarked upon an education at THE Florida State University. I was determined to save the world; first by becoming a psychologist who would help everyone who had a special need. Failing this, I would become a counselor working with juvenile delinquents. Surely my background would ensure success in this endeavor. Little did I realize at the time that my number was coming up in the local draft board and that I had a decision to make- Be drafted as a private E-l or sign up for officers candidate school. I chose the latter and the rest is history.

While enrolled at FSU, I held a student position with the FSU Police Department. Surely with this background and experience I would be suited for a related law enforcement position vith my new military employer. How wrong I was!!! Even after promises from my primary recruiter, I ended up as a candidate in the Armored Corp. Only after many Ietters, phone calls, and praver was I commissioned in the Military Police Corps.

I began my official law enforcement career as a Lieutenant in the Military Police Corps of the United States Army where I served as the Commanding Officer of a Criminal Investigative Detachment (CID) during the Viet Nam conflict. There were great times to be had during these years as Sally and I enjoyed the many new friends and acquaintances that we had. A career in the military was attractive and we gave it brief thought but realized we really wanted a different life style.