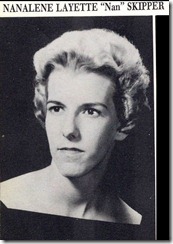 50th Reunion
After leaving Columbia High School, my great adventure began as I moved to Jacksonville, FL. to begin a new job with Southern Bell Telephone Company, and a new life away from the familiar confines of Lake City with a new roommate, by the name of Betty Thomas, a new home and a bright future in the big city. I had the time of my life, with dining, dancing and a life of complete freedom as any young lady would like to have. After the initial newness of my life became an everyday routine and the rent had to be paid, clothing bought, and food paid for the newness slowly wore off of my new life, and reality set in.

During my second year in Jacksonville, my neighbor across the hall met a new boy in town, by a very strange occurrence as a telephone operator on the long distance circuit, (now remember these were the days of actually talking to a long distance operator to connect to your party). My friend said she had met a U.S. Navy sailor stationed at Naval Air Station Jacksonville, and he was coming into town to meet her for a date. The date was introduced to me, and I was not particularly impressed by any sailor at that time, as my new life was just starting, and I had my whole future ahead of me.

The next day I had a call from this sailor, asking me for a date, and I was not at all interested, but he was persistent, and called me several more times. I can still remember this sailor hitchhiking all the way into Jacksonville, in the rain from NAS and expecting me to greet him in a wet mess, and I would not have anything to do with him, as my room mother even had to iron his wet clothing, and he looked so hurt, and frustrated in this situation that I really felt bad, and I said “You can call me sometime if you would like”, and the next day he did. This next day call was the key to my future marriage to Roy, and a great life as Nan Haines.

We were married on April, 8 1961, and a new life began, but as fate would have it “Viet Nam” was raging, and it was a tour of duty on the USS Shangri-La, for 18 months, and I moved back to Lake City, waiting for my husband to come home. After this traumatic time period we were reunited, and a new life began, we had a beautiful baby boy “Michael Edward” born on June 9, 1967, and a new home was in order. I worked for S&S food stores, and Roy worked for a Non Food Merchandiser (Save-A Stop), soon it was off to Columbus, Ga. for a promotion for Roy, than to Houston, Texas, and a regional manager in Austin, Texas. As luck would have it my husband had a contact with Occidental Chemical Company, and we moved back to White Springs, to assume a new position with Oxy. I worked at the Columbia County Bank, as Roy finished his MBA at Jacksonville University, and assumed the Oxy Chemical accounting position of Controller.I retired in 2003, after 30 years of service, and Roy retired in 2004 with 30 years. Our son Michael is 42, and married to a great lady, Jennifer. We have two Grandchildren, Madelyn 11 years old, and Joshua 7 years old, they reside in Jacksonville, and I spoil them at every opportunity. I have a wonderful marriage, and a great husband, even after the rough time I gave him.

We travel, and have enjoyed a great second honeymoon to Australia, and New Zealand. My days are now filled with taking care of my husband, my cat Boots, and my trips to “Curves”, and also baking for my two grandchildren.

I am so happy that I have had the opportunity to have known each of you, and wish you the best in the future.