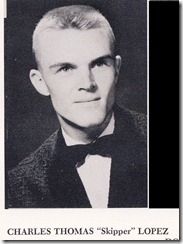 I graduated from Columbia High School, May 7, 1960 with the greatest group (family) of people I have ever known. After graduation I worked for my Dad and many other odd jobs around town. I finally got hired by the State Road Department along with Mike Collins, Billy George, Paul Barcia, Buddy Miles and countless others. Like the rest I started out as the low man on the totem pole, a chain man (not chain gang) on a survey group. After about a year of this Billy George and I decided we were going to join the Air Force and I did. Did you notice I said I, not we. Billy was medically disqualified and I went alone. I officially enlisted in the United States Air Force on September 19, 1961 and departed that day for Lackland AFB, San Antonio, Texas to begin basic training. At the end of our fifth week of basic training we received our assignments for the career field we were going to work in for the next four years. Of course my luck being what it is, I was assigned to the Air Police (Military Police for the Army). Three weets later, after graduation from basic training, I was loaded onto a bus (with 15 others from my basic training flight) and transported to the other side of the base to begin eight weeks of Air Police training. I graduated from Air Police training on December 28, 1961 and was lucky enough to make it home for News Year Eve and a party out at Ocean Pond at Charlotte Arnold’s parent’s cabin.

My first assignment was with the 306th Combat Defense Squadron, Strategic Air Command (SAC), MacDill AFB, FL. I was at MacDill during the Cuban Crisis and worked more hours than I want to remember. After 2-3 weeks all personnel and aircraft were reassigned to Hunter AFB, Savannah, GA where we remained until the crisis was over. In February 1963 I was re-assigned to the 451st Strategic Missile Wing, SAC, Lowry Air Force Base, Colorado. In June 1965 I was transferred to the 19th Combat Defense Squadron, Homestead AFB, FL where I remained until I was discharged in June 1966.

After being discharged from the Air Force I moved back to Colorado and went to work for the 140th Tactical Fighter Wing, Colorado Air National Guard, Buckley Air National Guard Base, Aurora CO. In July 1966 I was hired as a full time civil service Security Police Technician. In January 1968 the entire Wing was ordered to active dufy in support of the Pueblo Crisis. I was sent to McConnell AFB, Kansas where I was a Security and Law Enforcement Flight Chief for four months and then assigned duties as Non-Commissioned Officer in Charge of all Security Police Training. In April 1969 we were all released from active duty and I returned home to Colorado.

In March of 1977 I applied for a four year special active duty assignment with the Air Force and was accepted in June 1977. I was offered the opportunity to stay on active duty and accepted the offer in August of 1979 and re-enlisted.

In July 1999 I retired from the Air Force and started teaching Air Force Jr. ROTC at Houston County High School in Warner Robins, Georgia. In October 1999 I was selected for a Special Agent position developing facility security risk management analysis procedures for the Federal Aviation Administration at their National Headquarters in Washington DC. I stayed in DC from October 1999 until July 2001 when I was offered a position in Jacksonville, FL. I am responsible for securiry risk management analysis (conducting assessments and inspections) for 42 FAA facilities throughout Florida. We have been here since August 2001 and don’t intend to leave Florida again, except to visit my grand children. My only other move will be to come home to Lake City someday and finish out the rest of my life close to those I love. . . family and friends.

The following is a list of where I have been from September 1961 to present:

Thanks to the US Air Force here is what I was able to accomplish to further my education, although I have to admit it took me a long time to do it.

A little bit about my family. I am married to the former Kim, Kum Sun (the u’s are pronounced as double o’s, Koom Soon or you can call her Kim) of Mokpo, South Korea.

The rest of the brood is listed below: