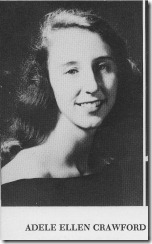 My name is Adele Crawford Hubbell. After graduating from Columbia High I went to Baptist Memorial Hospital, studied and became a registered x-ray Technician. I retumed to San Diego and took a job in La Jolla, at Scripps Hospital & Clinic. I have worked and taught from St. Luke Hospital in Jacksonville to Honolulu Hawaii for twenty years. My husband is retired Navy, so we have been blessed to travel and live is some great place.

This is a few of the high points.

In 1989 my Mother and I retumed to China where Mother lived for five years as a child. We were able to get out of Beijing the day before the shooting started. I have never seen so many people in one place that were in Tiananmen Sq.

We have gone to Costa Rica and Mexico several times to study Spanish, as many people in this area only speak Spanish.

Last year we took our two grandsons to the Atlantis in the Bahamas. That has to be one of the best places to take a vacation with young children.

We have done several hiking trips in Europe.

I hope to see everyone in April.