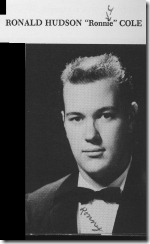 After graduation from CHS I attended Stetson University and received a BA in History and Political Science in June, 1964. In the Fall of that year I entered the University of Florida College of Law, graduating in December of 1966. In April of 1966 I married Linda Payne of Rome, Ga. We met on the beach at Daytona during a school break in 1965. During the period from 1967 thru mid 1972 we lived in Atlanta, Georgia where I worked for Sears, then with the Trust Company of Georgia in trust banking. From med 1972 thru June 1974 I worked as Trust Officer in charge of estate administration at Citizens National Bank in Orlando. Though Orlando was exciting, we decided to move back to Lake City where I practiced law with Frank (Butch) Gafford until late 1977.In 1974 we were blessed with the adoption of our daughter Melissa. I accepted a job offer from the law firm then known as Brannon, Brown, Norris, Vocelle, and Haley that year. My practice there dealt primarily with banking, real estate, general business matters, and bankruptcy. In June of 1995, several years after having been made a partner in the firm, I made the decision to retire in order to devote more time to family matters and personal business interests. Having always loved the mountain country Linda and I decided to move to Clarkesville, Georgia in 1997. The year 1999 brought another move, this time to Rome, Georgia where we now live. Our daughter and three grandchildren also live nearby, being Rachel, 13, Andrew, 9, and Alyssa age 7.

Military Service: Army National Guard in Florida and Georgia from 1966 thru 1972.

Special Interests: Riding, customizing and at one time restoring Harleys, most music, architectural history Gator football, shooting and gun collecting, and playing with my grandkids.

Mr. Cole was born in Lake City, FL, on April 10, 1942, son of the late Dewey Washington Cole and the late Roberta Selby Cole. He was also preceded in death by a granddaughter, Rachel Lynn Cole. Mr. Cole was a veteran of the Army National Guard. He received his B.A. from Stetson University and went on to obtain his Juris-Doctorate from the University of Florida. He practiced law for over 25 years, starting with Trust Company bank, where he was in estate and will planning, before moving to private practice with the Brannon & Brown Law firm. Mr. Cole was an avid motorcycle rider and loved his Harley’s. He attended Pleasant Valley North Baptist Church.

Survivors include his wife, Linda Payne Cole, Rome, to whom he was married in 1966; a daughter, Melissa Stigers (Barry), Waddy, KY; 2 grandchildren, Andrew Long and Alyssa Cole; his brother, Richard C. Cole (Judy); nieces and nephews.

In accordance with his wishes, Mr. Cole will be cremated and a memorial service will be held at a later date in his hometown of Lake City, FL.