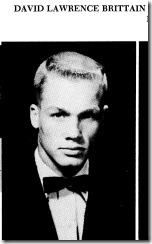 Following graduation from CHS, I went to FSU where, after first trying physical education and then business, I finally ended up graduating in 1964 with a degree in history-the subject that was always easiest for me.

ln August 1964, the same month that I graduated from FSU, I married Carol Gossman of Homestead, Florida, whom I met during my senior year. We settled in Tallahassee when I obtained a job with the Florida Department of Education in November 1964. I spent 30 years with the FL DOE, the last 16 of which I was the Director of Educational Technology for the state educational system.

I retired from the DOE on November 30, 1994 and joined a management consulting firm, MGT of America, lnc., based in Tallahassee. I spent 11 years with MGT, where I became a partner in 1997 and throughout my time there, headed up the Educational Technology Practice Area.

During our time in Tallahassee we had two sons, Scott who is now 41 and a bachelor living in Atlanta. He works for Northrop Grumman, who through a contract, supports a segment of the Center for Disease Control’s web site. Our second son, Jeff is 39 and an engineer for Prebble-Rish. He and his family live in Panama City. He and Shannon have our only grandchildren: Samantha who is eight and twin boys, Alex and Jason, who’ll be six in March.

During my time with the DOE and MGT I was active in Kiwanis, becoming President of my club in Tallahassee and Lt. Governor of our division. I also became active in an international organization: the lnternational Society for Technology in Education (ISTE). I served a term as President of ISTE in the late 90s and continue to be involved as Chair of ISTE’s Conference Committee and as a member of the Finance Committee.

I retired from MGT on April 30, 2006. A bit over a year later we put our Tallahassee house on the market and moved to our beach place in Mexico Beach, a small town about 20 miles east of Panama City. We love it at the beach, but the only part of our retirement that has not gone well is that our house in Tallahassee still has not sold, after being on the market for about two and one-half years.

Our most favorite past time is travel and we have been blessed to be able to see many parts of the world. We have taken a Scandinavian and an Alaskan cruise; river cruises in Russia (Moscow to St. Petersburg) and China (the Yangtze River plus Beijing, Xian [and the Terra Cotta warriors], Shanghai and Hong Kong); and traveled by car three times in Europe (mostly Austria and Switzerland); also by car around the eastern and central part of Australia; and again by car all over the small country of New Zealand. We have more trips on our list so when our house finally sells, we will be taking off for more.

ln retirement, in addition to travel, we enjoy looking after the grand kids, reading and doing things together. We have been blessed more than we deserve.