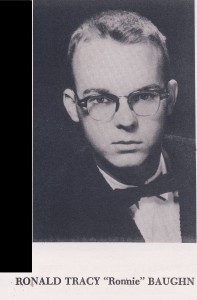 It has been a long time since high school graduation. When I look back upon “our time” in school and growing up in Lake City…I remember a most carefree and happy of times.

Following one of our school counselors saying to my folks that they should not waste their hard earned money sending me to college I enlisted in the military service…then I went to college and achieved a Bachelor of Science and Masters Degrees…guess I showed her! I had married before leaving the service and can now look with pride on two sons, two grandsons and one granddaughter. Unfortunately the marriage did not last.

Began a career in law enforcement and retired after 35 years with a federal agency having achieved some measure of success, experiencing great boredom and excitement, and traveling throughout the domestic United States and many foreign countries. After retirement did some teaching at federal academies and for the U.S. State Department in foreign lands.

Following retirement from federal service I began a private investigative business performing criminal and civil investigations primarily for insurance companies and private law firms. The business was successful until Hurricane Katrina, losing two homes and everything I possessed to Katrina…began an elongated battle with an insurance company and eventually settled. Moved out west to escape the ocean, commune with nature and began fulfilling a dream as an artist. Have been painting for several years now.

Returned home during 2008 for the holidays and to help my mother recover from an illness and decided to stay. In February of 2010 joined a group of other artist to form the High Springs Art Co-Op and now hang my art in our new gallery…please visit.

After several years of being alone I recently asked a classmate, Judy Smith Pomeroy, if she would marry me…she said “Yes”…the wedding will be April 30th and we will reside in Lake City.

There have been a few bumps in the road but GOD has blessed me…and I am thankful for his presence in my life. I wish everyone the same.