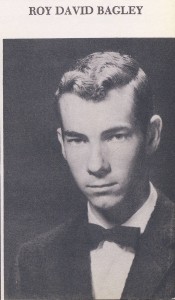 Mr. Roy David Bagley, 72, of Branford, passed away on Wednesday, May 27, 2015 at the North Florida Regional Medical Center in Gainesville from complications after heart surgery.

He was born October 15, 1942 in Union County, Florida to the late Clarence and Eunice Williams Bagley.

Mr. Bagley was raised in the Lake City area and graduated from Columbia High School class of 1960 and served in the United States Army from 1965-1967, having served in the Military Police.

He started driving semi-trucks at the age of sixteen for his father. He would haul produce for his dad as far away at the “Big Apple”, New York City, without the use of GPS or cell phones. Years later he would begin his own business, “Bagley Trucking”, in Lake City and eventually moving his business to Branford where he resided most of his life. When his children, Karri and Tim, were very young, they would go with him on his long truck hauls. Karri remembers many of those long rides with her dad and said, “It seemed like they would last for weeks and weeks,” but she would not trade that time spent with him for anything.

He was a member of the Church of Jesus Christ of Latter Day Saints and was currently the Bishop of the Branford Ward in Branford, FL.

He was preceded in death by his parents and his brother, James Lewis Bagley.

Funeral services will be conducted (TODAY), Friday, May 29, 2015 at 10:00 AM at the Church of Jesus Christ of Latter Day Saints Branford Ward in Branford, FL with President Joshua Smith of the Lake City Stake presiding.

Interment will follow at the Oak Grove Cemetery near Lake Butler.
https://www.gatewayforestlawn.com/notices/Roy-Bagley